The dominant themes of tomorrow’s world

There are many expert assessments of the future out to the middle of the century.  One of the better strategic assessments to come across my desk was undertaken back in 2010 by the British Ministry of Defence.

The MoD strategic assessment out to 2040 draws out three crucial themes all of which are dynamic but core to shaping our world. 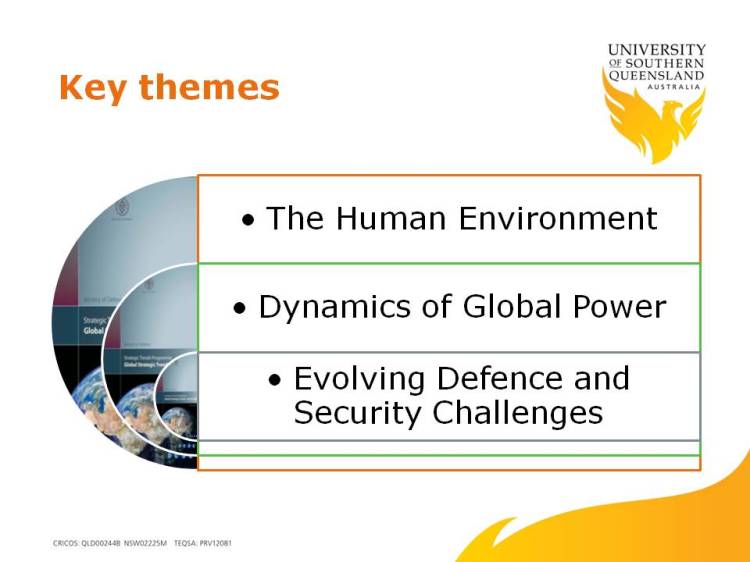 Compared to the relatively stable past quarter century, the next 25 years look potentially far more volatile with political and military power being dispersed more and the dominance of one superpower being brought into question.

To organise these themes and achieve a focus on potential “strategic shocks” the MoD intersected the high level themes with what it called four ring road issues which are already well integrated and reverberating in today’s world. 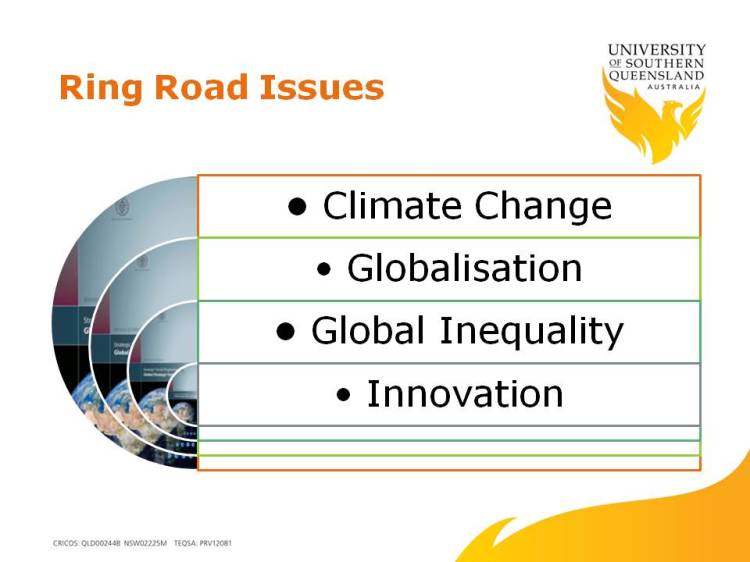 Interestingly, all major defence institutions identify climate change as a major geo-strategic risk factor in the future and yet here in Australia we have demoted the issue to the background, almost pretending it does not exist or is relevant.

In the coming decades climate change will be the single most important factor shaping the future of regional Australia and many places overseas.

The Mineral Council’s Brendan Pearson may claim that over the past decade worldwide the growth of coal fired electricity has outstripped wind and solar sevenfold, but this is in itself a clarion cautioning as to the urgent imperative of an energy transition de-carbonising the global economy.

Brian Haratsis covered the major themes of globalisation, so I will not go into too much detail other than to say that we have two contrary trends afoot with globalism on the one hand, and bilateralism and free trade agreements structuring a world of preferential deals on the other.

Globalism has seen a massive breaking down of barriers to the flow of goods, services, capital, peoples and information across national borders.  While this transformative process manifests differently in countries according to their stage of development, The Economist reported recently that the rise of FTAs and other forms of preferential trade agreements post GFC have resulted in the breadth of cross-border flows being narrowed.

On the global inequality theme only the other day Rupert Murdoch told a G20 Finance Ministers meeting in Washington DC that only 1% of Americans paid 46% of the US income tax bill and 1% of British taxpayers paid more than a quarter of their tax bill.  Half of all adults across the globe do not have bank accounts.

Here in Australia more than half of the nation’s taxpayers are net benefit recipients on the government ledger, an inequality which is compounded in the regions with a third of the people in the poorest state, Tasmania, receiving some form of government welfare.

So global economic inequality is a first world as well as developing world issue – in fact it is truly a universal scourge and is manifestly worsening.

These “ring road issues” as they intersect with the Big Three themes create the imperative for social, economic and technological innovation to ensure the future has some chance of being sustainable.

The risks are great and they don’t happen far off into the future.  The World Economic Forum, for example, in its 2014 Global Risks Report, outlined the major risks shaping the contemporary world which will impact far into the future.

The Davos group see the key risks as including:

Other sources of risk can be constructed from statistical analyses of various economic factors.  Professor Artur Bris from the World Competitiveness Centre at the Swiss business school IMD warns, for example, that history points to another financial crash in 2015.  He cites five risk factors impacting on the global economy:

Looking a little further on, credible strategic shocks identified by the MoD Strategic Trends Program out to 2040 include:

So there you have a broad framework in which to view a spectrum of possibilities from probable to plausible to barely conceivable.

Our world is gripped in the midst of massive change, change we don’t often understand or comprehend and of the strategies being pitched for the future many are already obsolete.

As I have said many times before, quoting Stafford Beer from his Platforms of Change (1975) “Acceptable ideas are competent no more and competent ideas are not yet acceptable.”

Themes that make for the Agenda – global, national, regional and local

Former Vice President Al Gore in his most recent book, The Future, describes our time as one of paradigm change in which the risks outlined above consolidate succinctly into six emergent themes which will dominate humankind through to the second half of this century.  They are:

Gore suggests, and I think he is right, that humanity has got itself to a point where it faces no option but to consider the alternative to unsustainable development.

The former Vice President of the United States writes of the coming decades as the “beginning of a massive global transformation of our energy, industrial, agricultural, and construction technologies in order to re-establish a healthy and balanced relationship between human civilisation and the future

By 2040 the global human population is expected to reach about 8.8 billion – or two billion additional to the population now – but its growth will be flattening out by then.    China will be de-populating and India will be the most populous nation on Earth.

Just five countries – Ethiopia, Nigeria, India, Indonesia and the US will be accounting for half of the global population increase.

Up until about 2000 per capita GDP growth mirrored population growth but it seems the appearance of the digital economy is changing the relationship between people and productivity.

Indeed for the past decade or so we have had an emergent co-creation of a parallel universe called the ‘virtual world”.  The magnitude of its ascent is difficult to comprehend.

As Lachlan Murdoch said recently during his Sir Keith Hancock Oration: “90% of the data in the world did not exist two years ago.”

He could have also cited Gartner’s prediction of the IT support sector’s growth to more than $260 billion by 2020 and the number of things being connected to the internet growing by more than 750 million a year as transforming our way of life. Already 3 billion machines, technologies and things are digitally enabled and linked.

Writing in The Australian, Geoff Culbert the regional CEO of GE summarised the “dramatic transformation…occurring in industry” as owing much to three driving forces impacting “at the intersection of technology and data”.  They are:

In his presentation this morning Brian Haratsis reminded us of the emerging eclipse of labour by information technology or artificial intelligence.

Earlier this month The Economist provided a special report on what it termed “The Third Great Wave” highlighting the impact of digital and information technology on the growth of per capita GDP.

Their chart featuring the UK and USA back to the 1750s showed that per capita growth in GDP in both countries had effectively halved with the advent of the modern computer age. 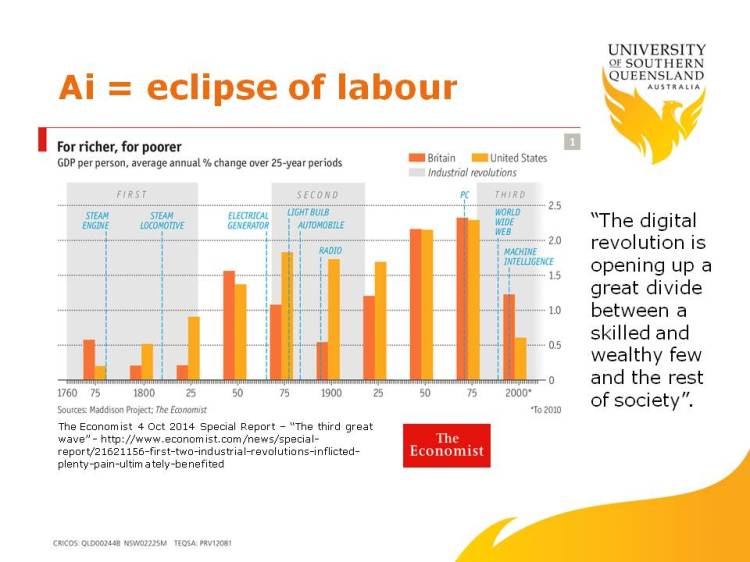 The Economist concluded: “The digital revolution is opening up a great divide between a skilled and wealthy few and the rest of society”.

The implication into the future at both the social and individual level will be to find new ways of achieving meaningful activity and output both in work and recreation.

The world of digital technology is also not the only source of transformative possibility.

Biotechnology will continue to frame our lives and economic possibilities, particularly as it converges with other sources of technology.

Jim Greenwood CEO of the US life sciences industry group, BIO, tells us that today more than 900 medicines and vaccines use biological processes to treat more than 100 diseases.  Over the past decade, biologics accounted for more than one third of new medicines.

Biological sources, he says, will account for an $84 billion renewable chemicals market by 2020.

In aviation, Boeing is experimenting with a plane fuelled by hydrogen with nothing but water as its emissions.

Lockheed Martin went public recently confidently predicting that it will commercial nuclear fusion within a decade.

As the ANUs, Dr Matthew Hole recently wrote in The Conversation: ““Per kilogram of fuel, fusion releases four times more energy than fission, and a staggering 10 million times more than coal.”

And even if we don’t leap that far forward a switch to shale and coal seam gas could make coal and oil redundant in much of the Asia Pacific region, a recent survey of the regional energy industry has found.

A few years ago CSIRO told us these things were shaping our lives and would increasingly bear upon us into the future.  The so-called megatrends include:

These megatrends are gaining granularity in a world where geo-political volatility is both increasing and is very close to home.  Australia is a key stakeholder in potentially one of the most volatile regions on Earth. 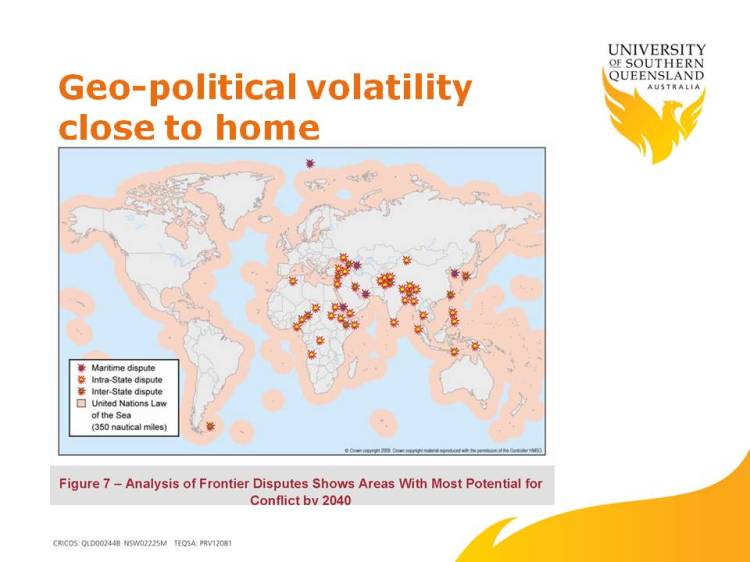 This is how the Ministry of Defence in the UK sees the part of the world we are in right now – it’s the straits of Malacca, the South China Sea, and a group of islands between China and Japan which all come into play. 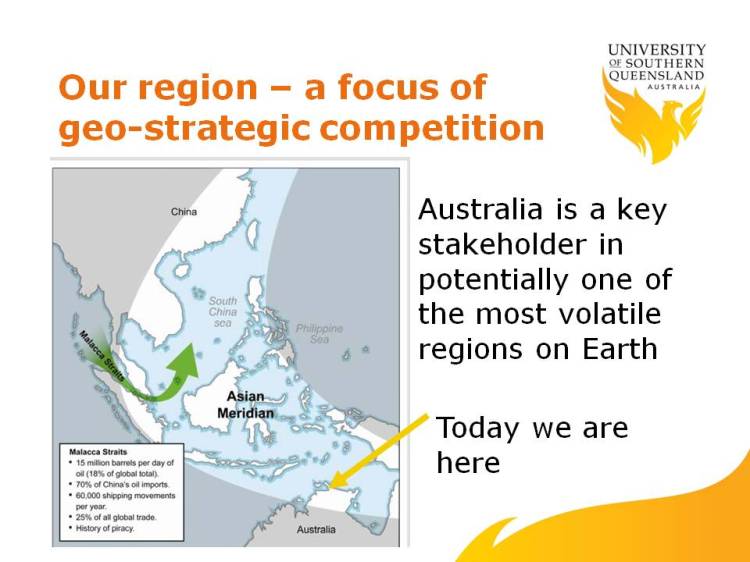 No one needs a stable peaceful region more than China.     Former Prime Minister Bob Hawke rightly says that Australians have “ignored its scale and implications”.  He told a conference at UQ recently: “we are in denial about the transformation of regional politics before our very eyes”.

While Hawke says there is no evidence China wishes to subjugate its neighbours, he also says that “no one can be surprised that their aspirations have changed as their wealth and power have grown”.

So against such a complex geo-strategic backdrop I find it quite perplexing and indeed a bit alarming to see a projected virtual flat-lining of Australian defence expenditure in the years out to 2030 and beyond possibly.

More plausibly if the current political fabric of our region comes unstuck we can look forward to a doubling in defence expenditure by 2040 and major impacts on other parts of the Federal Government’s budget.